A Very Poppy Christmas is the third extended play (EP) by Poppy. The EP was released on December 1st, 2020.

On October 1st, 2020, a fan had asked Poppy on Twitter to release a Christmas album. The following day, Poppy responded to them by announcing that she would be releasing a Christmas EP.[1] The EP was announced on November 17th, 2020, alongside the release of its lead single "I Won't Be Home for Christmas".[2]

It was revealed in a December 2020 interview with Kerrang! that Poppy recorded the EP over a single day in July 2020.[3]

The EP is centered around Christmas, which is both a sacred religious holiday and a worldwide cultural and commercial phenomenon.

"I Won't Be Home for Christmas" was released to digital retailers through Sumerian Records on November 17th, 2020, and served as the first single to the EP. Poppy co-wrote the song with Simon Wilcox, and co-produced it with Ghostemane. 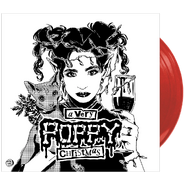